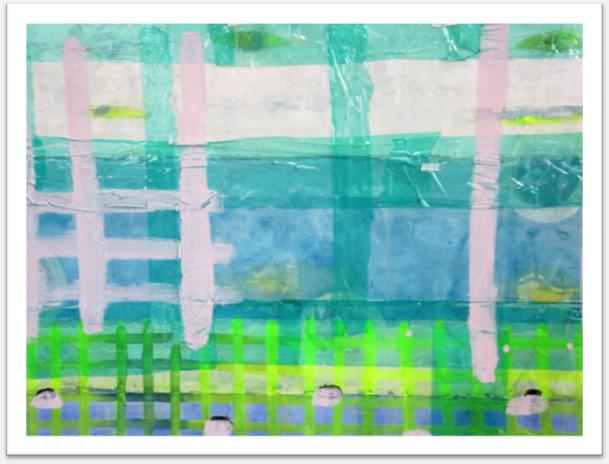 Room To Spare by Agnes Field at Cannon Beach Gallery

The Cannon Beach Gallery will be hosting a dynamic installation curated by Astoria resident, Jessica Schleif, entitled Reclaiming the Green World from April 4-28, 2014 with an Artist’s Reception from 5-7pm on Saturday, April 5. The third annual green inspired show at the Cannon Beach Gallery happens in April in honor of Earth Day.

Recology of Western Oregon is the Exhibit Underwriter for the exhibition

A well-known garden maker and artist, Schleif is known for her innovative installations that include natural and re-purposed materials, which the she uses to make interactive environments. The show, Reclaiming the Green World, was conceptualized as a group show with artists exploring the concept of creative culture verses consumer culture.

The exhibition well established artists like Agnes Fields who will be showing two-dimensional, mixed media work inspired by her recent artist in residency in Finland and Anne Greenewood, whose “What’s in the Bag,” interactive, community based project explores the concept of identity and reclaiming our relationship with the natural world. In addition, there will be terrariums and installation work by Jessica Schleif, Kimberly Waites, Andee Gowing, Maurico Rioseco, Thor Andersson and Karl Travenshek.

‘Hanging out on a Limb,’ a watercolor by Jeffrey Hull, is available at the Jeffery Hull Gallery.

For many on the north Oregon coast, March is a month of considerable frustration — it is so near spring, and yet the weather is so unpredictable and often violent.

Spring vacationers often spend a bulk of their time indoors, watching the storms roll in. Thank goodness for Cannon Beach’s art galleries to ward off the stark weariness of March and provide warmth, color and a reminder that change is indeed coming.

The Bronze Coast Gallery is looking forward to Savor Cannon Beach Wine and Culinary Festival March 6 through 9 and will host Elk Cove Vineyard during the wine walk on Saturday, March 8.

The gallery has two new sculptures by Jack Kreutzer — one is aptly named “Spring Time,” depicting a female figure. The other, “Song of the Violin,” shows a woman standing in a canoe holding a violin behind her back.

At Haystack Gallery, Rie Muňoz will be the featured artist in March. The gallery is fortunate to be able to offer some rare limited editions and silkscreens that Munoz’ son kept when the edition officially sold out.

During the wine walk March 8, Haystack Gallery will feature the images of Bart DeGraaf. His gicleés portray wine and frogs in a variety of ways. “Evolution” shows a tadpole in a glass of white wine gradually evolving to a full-fledged frog in a glass of red wine.

All sales proceeds from their work will benefit the North Coast Land Conservancy, an organization that works to conserve and protect the coastal landscape for people, plants and wildlife. What makes Maine and Wing’s work so special is that all their photos are locally shot, and each image has a great story.

The pictures are available in gallery-wrapped gicleés on canvas or matted prints.

The Cannon Beach Gallery hosts a new exhibition during March titled “Abstraction Revisited.” An artists reception will be held from 5 to 7 p.m. March 1.

Jeffrey Hull, of Jeffrey Hull Gallery, has a new watercolor of brightly colored floats hanging from tree branches. “Between these crab floats and the limb someone hung them on…. there are stories of storms to be told,” Hull said.

“I’ve personally had to limit my float collecting to bringing home only the ones that are still intact and have a rope attached. I still have more than my share nailed to the fence and hanging from limbs.”

Love is in art. 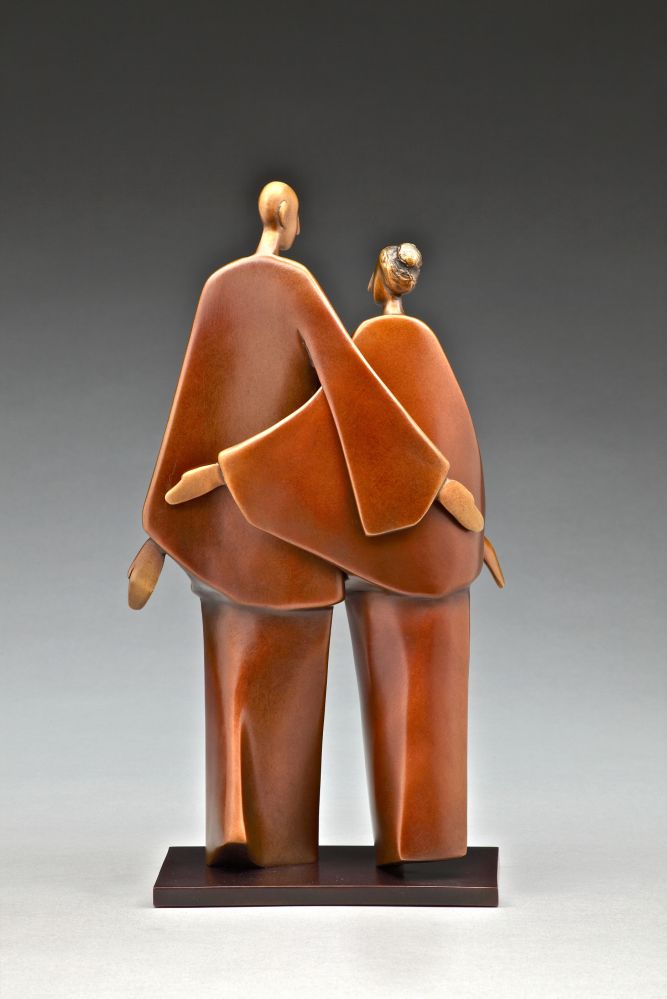 By Eliza Davis
Images of love in all its forms are the icons of February.
At Cannon Beach’s art galleries, representations of love are a year-round affair.
Whether it be romantic, love between a parent and child or the affectionate poses of animals with their young, love and passion provide strong artistic inspiration.
Northwest by Northwest
“Valentine’s Day is a day to be thankful for the loving relationships in our lives, and Cannon Beach is a place to celebrate our milestones on beach time — birthdays, anniversaries and romance remembered and cherished,” said Joyce Lincoln, owner of Northwest by Northwest Gallery.
Bronze sculptor and long-time friend of Lincoln, Georgia Gerber, commemorates the relationship of all living things and their connectedness through her sculptures.
“Refuge and sanctuary are found in Cannon Beach, a national wildlife refuge and marine garden sanctuary,” Lincoln said.
Bronze Coast Gallery
At Bronze Coast Gallery, sculptor and painter Linda Prokop’s bronze sculpture, “Reunion,” depicts two human forms in a moment of joyous reconnection.
The bronze, “Peaceful Sleep,” by Rosetta, finds two affectionate cats curled together in slumber while her “Single Mom” sculpture captures the fierce, yet tender, expression of a mother cheetah with her young.
Male and female figures walk with arms around each other in Carol Gold’s sculpture titled, “Friendship.”
Jeffrey Hull Gallery
What could be more romantic than a rosy sunset over the Pacific? Jeffrey Hull of Jeffrey Hull Gallery has completed a new watercolor titled “Guardians at Sunset.”
“The beautiful sunsets we’ve enjoyed recently have kept me working with a rich color palette. I keep returning to the rugged but right coastline with treed sea stacks for inspiration. Their reflections in the tide pools add just enough drama and peacefulness to create the mood I’m after,” said Hull.
Primary Elements
Stephanie Ansley, owner of Primary Elements Gallery, celebrates her birthday on Valentine’s Day.
“I have always embraced this special day as my own,” she said.
“Haystack Honeymooners,” a bronze sculpture at Primary Elements Gallery by Heather Soderberg-Greene, depicts two tufted puffins in a loving bird embrace. Soderberg-Greene is a honeymooner herself, having recently wed husband Richard Greene.
“Haystack Honeymooners” is the second in a series of coastal seabirds that Ansley asked Soderberg-Greene to create, and she will unveil a new pelican during Spring Unveiling in May.
New at Primary Elements Gallery are custom rocking chairs by Astoria artist Dan Supple. The chairs are fabricated from northern white ash lumber and leather, incorporating Marucci baseball bats into the design.
Cannon Beach Gallery
The Cannon Beach Gallery will host an All Juried Show with the theme “Red” from Feb. 1 to 24 with an artists reception from 5 to 7 p.m. Saturday, Feb. 1.
The guest curator for “Red” is Danielle Knapp, the McCosh Associate Curator at the Jordan Schnitzer Museum of Art in Eugene.
Artists from across the region participate in the juried show at the Cannon Beach Gallery in a wide variety of mediums. “Red” is underwritten by the Cannon Beach Hotel.
White Bird
New at White Bird Gallery, artist Senja Antilla creates mosaics from reclaimed ocean-tumbled wood. Her materials come from houses that have slid into the ocean at Washaway Beach, North Cove, Wash. The artist frequently visits the eroding beach to collect distressed wood. The assortment of wood used in her mosaics includes outdoor siding, inside walls, baseboards, door frames and window frames, as well as found hardware and photographs of the original house. The resulting artworks are contemporary compositions that recall time, history and the power of the natural cycle.
© 2014 Daily Astorian. All rights reserved. This material may not be published, broadcast, rewritten or redistributed.

A new year has begun, bringing renewal, resolutions and a sense of revival.

As the holiday lights fade, the art galleries in Cannon Beach are the perfect place to keep alight our sense of wonder and appreciation for aesthetic beauty.

As a stroll on a quiet winter beach renews the spirit, a stroll through the local galleries restores our senses. Resolve to get out and visit the galleries that make Cannon Beach an international art destination.

The season of angels may be behind us, but Primary Elements Gallery artist Michael Parkes seems to be enamored with the possibility of winged creatures that might take a man from the everyday world to a world of magic. Originally, “Angel Affair” was portrayed as an oil painting, then printed as a lithograph and now is being offered as a limited edition bronze sculpture.

Other winged creatures include several tufted puffins by sculptor Heather Soderberg. The gallery looks forward to her newly sculpted sea birds, including a puffin in flight, that will be cast in bronze next month, and a pelican that will debut at Spring Unveiling.

Sculptor Richard Sears has on display a blue heron, a falcon and a parent with a fledgling pair of penguins. All three sculptures boast beautiful colored patinas and are No. 1 in their limited editions.

A whimsical mixed-media piece by Brenna Tyler titled, “The Ship of State,” depicts a blindfolded captain and a crew with broken paddles.

Northwest by Northwest announces the yearend release of new works by Oregon photographer Christopher Burkett, a stalwart artist of the gallery for over 20 years. Each year, Burkett builds a portfolio of his latest images in his “Annual Collector Edition.” Northwest by Northwest Gallery is downtown across from the City Park and Information Center on Spruce Street.

Oregon painter Pamela Claflin recently delivered several new paintings to Bronze Coast Gallery. A scene from the side of Ecola Park Road of blooming skunk cabbage was the inspiration for “Coastal Spring,” while a waterfall at Short Sands Beach is the subject of “Hidden Falls.” A new sculpture, “First Light,” by artist John Coleman, has arrived at Bronze Coast. Coleman, an award-winning master sculptor and member of the prestigious Cowboy Artists of America, strives to tell the stories and history of Native Americans and the American West. “First Light” is of a Blackfoot or Shoshone woman, wearing a traditional animal robe, beads and a crucifix. According to Coleman, crosses were common trade items through the 1830s. Coleman originally did an oil painting, titled “Last Light,” of a woman looking down and the light fading. “First Light” is the companion piece, with the woman facing up into the morning sun. Also new at Bronze Coast Gallery is a collection of bronzes by Carol Gold. Gold’s simple, yet elegant works have been a staple for over a dozen years at the gallery.

Bronze Coast Gallery is downtown in The Landing.

Plein air is a term derived from the French expression “en plein air”, meaning “in the open air” and specifically refers to the act of painting outdoors. Cannon Beach’s popular “Plein Air & More” is a three day event which includes a Friday night “meet & greet” with the participating artists and gallery owners, along with a collaborative show of art work. On Saturday and Sunday, more than fifty artists, represented by Cannon Beach’s art galleries will be creating works of art on location throughout town and on the beach. Many will work in the traditional method of plein-aire painting, while others will sculpt, create and photograph in their own unique styles. Individual galleries display the finished works along with hosting receptions for the artists Saturday and Sunday.